My client Kim Smith’s statement to the press about Hammonasset peeping incident. 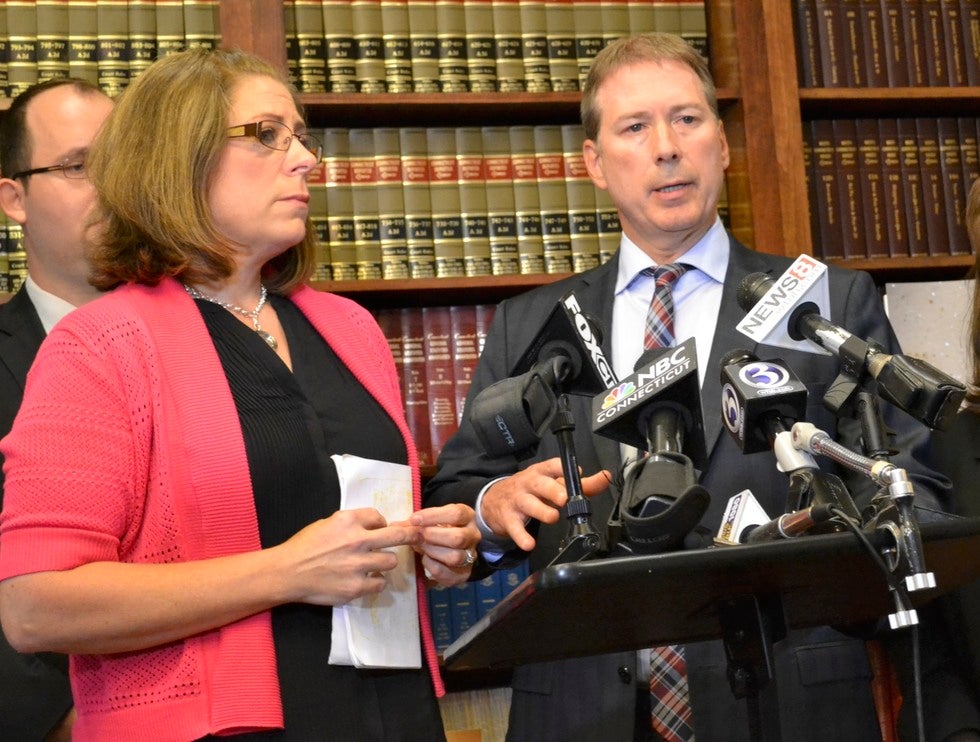 I am Kim Smith. I am here today to tell my story, to break my silence, and tell the people of Connecticut what happened to me and my two young daughters while showering at Hammonasset State Park.

I am here now, three years after two park employees watched me shower with my two young daughters, because I can no longer be silent. My daughters and I were violated and victims of a crime. I was too embarrassed and humiliated to come forward and speak publicly about this at the time this happened. I did not want to expose myself or my children in the public eye because I wanted to protect them from this. But now, in light of recent developments at the park and the depositions I have read, I can no longer be quiet. The people of Connecticut need to know, when showering at a state park, proceed with caution.

On July 5, 2014, a camera was found inside the bathhouse at the campground at Hammonasset Beach State Park in Madison. A spokesman for the Department of Energy and Environmental protection called this an isolated incident. This is what outrages me!

I am here today to tell you that is not an isolated incident. Just a fews weeks before this latest privacy breach at Hammonasset, my attorneys were deposing park managers. One testified under oath that no policies are in place to address privacy issues, peeping incidents and voyeurism at the state parks. I believe park managers lacked accountability and responsibility for what happened to me and things are still happening on their watch!

The park supervisor at the time, William Mattioli, testified that to his “knowledge” there have not been any policy changes or overall employee training at state parks in Connecticut regarding peeping incidents, how to better protect people at parks from voyeurism, and other privacy issues. You can find this testimony on page 94. We are releasing the transcript in its entirety. Also, on page 36 of his deposition, Mr. Mattioli testified that he doesn't “specifically go looking for cameras” but he if “happened to see one,” he would “address it.”

I was hoping that since my incident three years ago also at a campground bathhouse at Hammonasset, that there would have been major policy changes at state parks, like limiting who has access to bathroom facilities and installing a security system to more closely monitor employees with access to bathhouses and bathrooms. I was hoping this would be the case. I learned during my fact-finding mission, I was wrong, and with this latest privacy breach, I see it is still happening today!

Here is what happened to me.

July 23, 2011, as I mentioned, we were camping at Hammonasset State Park. It was a hot day and my daughters and I just returned from the beach. I took them to shower at the bathhouse near our campsite–building number 3.

I got the girls into the stall, undressed them and myself and we started to shower. While we were showering, I noticed something strange through a hole at the shower faucet. There were shadows and movement and I noticed a light on that I did not notice when we started. I moved closer to look through the hole and that's when I saw the outline of his face, his eyes staring back at me and his facial hair.

My heart sank and my stomach dropped to my toes. I quickly wrapped the girls in towels and we got out of there. I was shaking, mad, scared, humiliated, and of course, worried about my two young daughters who were three and six years-old at the time. I was trying to get out of the shower area to get our clothes on and came face to face with the man with the facial hair as he was coming out of the storage area that it is connected to the women's bathroom. He was not alone. He was with another coworker. I was scared. I tried to rush us all into the bathroom stall to put our clothes on and then noticed the big hole around the toilet in the stall, my heart sank again. People need to know that there is a pipe chase behind the bathrooms and showers. This is where the employees gained access, through their storage facilities, to watch us shower though the holes that were allowed to be present for over a decade. To this day, this pipe chase area is not blocked off.

I wondered who would do such a thing? Watch women and children shower while undressed.

As I mentioned, it wasn't just one man watching us but two–Ken Sabo and Brandon Marchant. The men actually worked for the park, that's right, state employees who later confessed to the crime–and cut a plea deal with prosecutors. They were fired from their jobs, which is a start, but I believe park managers should have and could have done more to prevent this. And now, with another privacy breach in the news, I know not enough is being done to protect those in their most vulnerable state.

Sabo and Marchant were originally charged with breach of peace, since a camera wasn't used. For the past three years, I have tried to pass new legislation that would make it voyeurism if someone peeped at children even if a camera wasn't used. I have been unsuccessful on that front so far. But I will continue this fight to change the laws until something is done to protect our children. To protect all of us.

I have been trying to fight this quietly, but I can no longer do that anymore.

My case is before the state's claims commissioner. I am trying to get answers as to how something like this could have happened to me and my daughters by two state employees at a state park. I honestly believe I was not the first person violated at that park. Who knows how many other unsuspecting women and children were watched unknowingly while showering or going to the bathroom.

Prior to leaving the park that awful day, something told me to take a look around. I walked to the bathrooms in our area and was horrified and disgusted to find that our bathhouse was not the only one with so many holes. A photographer by trade, I quickly grabbed my camera to document what I saw. I found many holes, near toilets, in shower stalls, everywhere, too many to count really. This was not an isolated problem. State workers saw these holes for nearly a decade and did nothing to fix them. In fact, one of the men who watched me in the shower claimed that workers knew where to go to watch women shower.

Despite these deplorable conditions which left my daughters and me vulnerable to the peeping incident which happened to us, Mr. Mattioli testified that both the head plumber (and maintenance supervisor) at Hammonasset were not disciplined for leaving all these holes in the women's facilities. In fact, Mr. Mattioli testified that he doesn't think the state should be held accountable for the actions of two employees, despite the fact that it was on his watch (and the state facility he managed) that these deplorable conditions were allowed and considered to be status quo.

Thomas Smith, the head of maintenance at the park, also testified that he had no formal training in maintenance. On page 55 of his deposition, Mr. Smith testified he never had any certification, licenses or continuing education provided by the state of Connecticut on how to better manage maintenance issues at state parks, yet, he was the person put in charge.

Since my incident, the holes in the walls have been fixed but this is not enough. It was only because I called police and filed a report that something finally changed.
I want to see new security measures in place like a digital swiping card which would keep track of employees whereabouts and who had access to what building and when. I would also like a door be put on the pipe chase area so that regular workers do not have access there.

What most people don't realize is community service workers, who have been arrested for various things, also work at the park. Many of them work to clean the bathrooms and have access to maintenance keys to all bathhouses. This does not sit well with me.

After reading those depositions, I decided to release them to the public for no other reason than wanting the public to know. DEEP will probably tell you that I am doing this to further my case. That is the farthest thing from the truth. I am doing this to shed some light on an ongoing problem at state parks and to give people access to what I have learned. I did not want to come forward and publicize what happened to me, I have remained quiet for three years while fighting this fight. But now, with a hidden camera being found at a bathhouse at the same campsite, I see that this is still happening.

It has got to stop!

After reading those depositions of state park workers, I was angry, upset and confused because not one of them was willing to take responsibility for their facilities or their employees. They feel like they have no wrong doing here and they all stand by their word. I find it hard to believe that in the 10 plus years these holes were present and continued to grow, that no camper ever filed a complaint or wrote a comment card about them or that no worker ever mentioned the holes all over the bathrooms (and showers) at Hammonasset.

I want real change and real accountability to protect others. What happened to me is done, but I will use what I know to protect others in the future. To this day, this incident, this violation disturbs me. The moment I am in a situation where I need to use a public restroom, a changing room at the mall, or shower after using a public pool or gym, I remember what happened to me and my children. I panic. I search.

This is always in my mind.

The following case is successfully handled in Connecticut courts by Attorney Levin.